Bob-E: A remote presence Robot controlled through a VR headset

Bob-E, a friendly VR robot, that allows you to look around, move around and enjoy being there


Bob-E is a new virtual reality (VR) robot designed and built by Ozeki specifically to provide free movement and head tracking. It will change the way you think about telecommunication and remote presence forever. Bob-E provides a truly immersive experience that allows you to take part in activities like never before.

The original goal of building Bob-E was to allow our friends and colleagues to take part in activities from a remote location. The side effect was that we created a friend. Bob-E is more than a robot controlled by a human, he is a member of the community. No matter who controls it, he is fun to be with. He is always around, and he has an amazing personality.

Once you take control of Bob-E, you will feel what it is like, when people smile at you, and how you will become a closer friend to those around you. You will learn and experience things you would not learn or experience if you were there as a human. 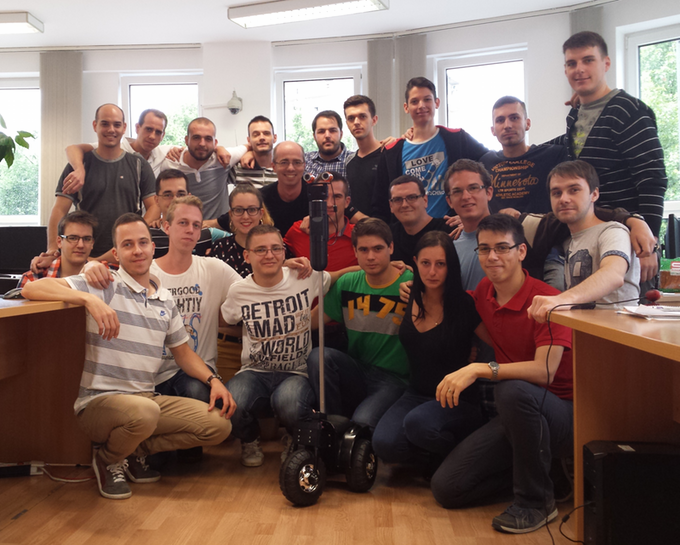 The only thing you will miss, is that you were not there with us from the beginning of this project. While we built Bob-E we had the best times of our lives. When Bob-E was created, the software developers, the electrical engineers and the 3D designers were all teasing and pushing each other, and this activity provided a great number of opportunities for fun and inspired outstanding achievement.

We are now more passionate about building robots, then we were ever before. We have learnt to work together amazingly well. It would be great if you could join us for a day at our office and experience the atmosphere.

When you start to use Bob-E, you will be amazed at how easy it is to operate. You simply have to put your smartphone (Android or iPhone) into the VR headset and turn your head to look around. You will also have a small bluetooth controller (a joystick) in your hands that allows you to move Bob-E around the room.

When you turn your head, the cameras of Bob-E will track every movement synchronously in real time. The robot offers fast, real time stereo 3D vision, that allows you to see what the robot sees just as if you were using your own eyes.

The key feature of real time head tracking is possible, because Bob-E's cameras are super fast. The cameras follow your head movements at an amazing speed of 0.19 seconds / 60 degrees. If you think about it: it is less then a 1/5th of a second for an average head movement. We haven't heard about any other device that even comes close.

Bob-E mimics the movement of the head

The experience is also supported by Bob-E's physical design. Bob-E's cameras are exactly 65mm apart, just like the human eyes. This provides a wonderful, realistic 3D vision when you look through the VR headset. It is a true 3D experience.

How can Bob-E be used

Bob-E is an excellent tool if you wish to use it in the office, or at an event and take part in activities from a remote location. It provides an amazing virtual presence capability. It allows you to go where you wish and look at what you want. The motors are powerfull and the 3D vision capabilities and the optics / resolution of the cameras are designed to allow you to